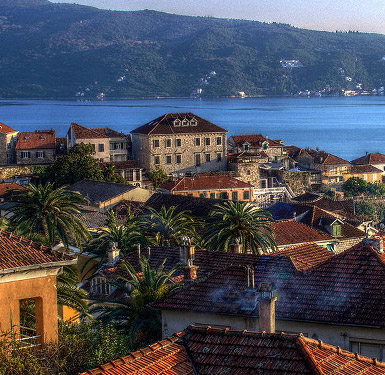 Herceg Novi is located at the entrance to the one of the most beautiful bays of the world Bay of Kotor and at the foot of Mount Orjen. It is a town where different civilitations met end blened leaveng a deep trace in its present image. At the first look the old town discovers a number of ramparts with high and mighty stone fortresses and towers.

The first in the chain of fortifications was Citadela or Macel on the seashore, whose remains still lie close to dominant fortress on the town seaashore, Forte Mare. 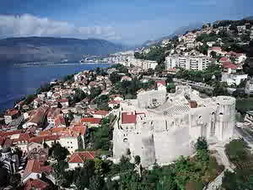 Kanli Kula ( Blood smeard tower) was built by the Turks after 1539. It was erected on the site of the foundations of an earlier fortification and has preserved most authentic architectural features of the time. It was restorted in 1966 and turned into Summer Stage, according to many the most attractive open - air stage on the entire Adriatic Coast. The fortresses are open for visitors.

At the main square of Herceg Novi is situated the Western Town Tower and the Clock-Tower erected in 1850. in sham Romanique style. The name of the Clock-Tower originates from the Turkish period, while the Venetians , who renovated it called it Tora. It is heraldic mark of Herceg Novi. The fortress called Španjola was erected at the hill above Herceg Novi, and it was given that name by the local populationbecause the Spanish, during their short reign (1538-1539), added some elements to it. The Turks carried on the work on thi monumental building, actually the best-preserved Turkish fortification object on the Adriatic , from 1539 - 1548. The fortress is surrounded by massif walls with four protruding round bastions on the corners. The valuable fortifications certainly include the century by the Austrian admiral Lazar Mamula. To the east od Mamula, on the very end of the western part of Luštica penisula, there is the fortess Arza. It is set on the foundations of an Ancient fortification. 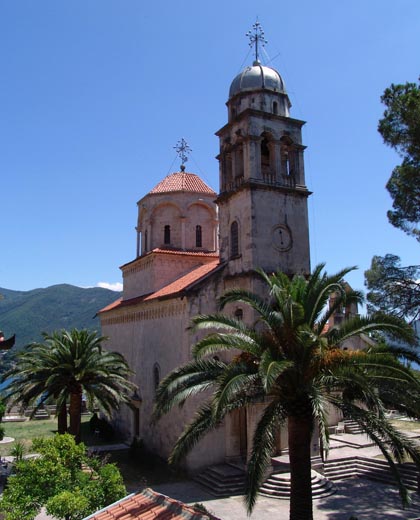 The complex of Savina Monastery is located at the distance of 2 km to the east of Herceg Novi in a uniqe ambience of Mediteranean vegetation. It consists of two churches dedicated to the Assumotion of the Virgin, cloister, treasury and St. Savas Church, at some distance on a nearby hill.

The big Church of the Assumption of the Virgin was built from 1777 till 1799. In architectural sense the Church is a mixture of styles from Byzantine, through Romano-Greek to Baroque and presents a good example of successful blending of eastern and western culture. The year 1030 is mentioned as the year of building of the small church of the Assumption of the Virgin. The oldest frescoes dare from the mid-15th century. St. Sava's Church was according to some sources made in the XV century, and according to others in the XIII century. The church of St. Michael the Archangel dominates the upper square of the Old Town , the popular Belavista. Its general space conception is on Byzantine style, the decorative elements recall Romano-Gothic and islamic reminiscence, this building of electic architectural spirit presents a rarely succesfull and imaginative blend of styles and is finer churches in the area.

On the territory of the Municipally there are 89 churches( 75 Orthodox and 14 Catholic). St. Jeronim's (St.Jerome's) is located in the Old Town, on the lower sqaure Mića Pavlovića. It was built in 1856. It is decorated with the works of the one of the greatest Baroque painters Tripo Kokolja of Perast. According to some archeological research it si acceptable to presume that on that site there it use to be the court of the founder of the town, Tvrtko I. The church of St. Leopold Mancić was erected by the venetians , after the liberation of the town from the Turks in 1688, a convent was built and next to it the small church dedicated to the Blessed Virgin Mary. From 1976 it is dedicated to Saint Leopold Bogdan Mandić, born in Herceg Novi, who was canonized by the Pope John Paul II, in 1983. St. George 's Church at Topla was restored in 1848. In this Church there is a most valuable Italo-Crete round icon of St. Peter and Paul dating from the XVI century. The building of the Church of St. Spas ( Ascension Day, Holy Thursday) began in 1709 next to St. George's, was completed in 1713.

Among significant sacral buildings, the following deserve being mentioned- the church of St. Sergej and Vakh from the XV century in the village of Podi that captures by its individual architecture, harmony and elegance , St. Andrew's Church in Kuti from the XVI century, St. Nikola's in Radovanići , St. Petka's in Mrkovi on Luštica from the XVIII century e+with rarely valuable iconostasis and fresoes by Dimitrije "daskal", founder of the famous Boka Kotorska Paintng School Dimitrijević - Rafailović, St. Tripun's on Luštica with the remains of fresoes dating from late XVI century, and St. Neđelja in Jošic, St. Nikolas's and St. Spiridons in Đenović, Our Lady's in Prijevor, St. Varvara's in Mokrine, Monastery Vavedenje Presvete Bogorodice ( Presentation of the Virgin) from the XV century located on the Islet of Žanjic at the entrance to the Boka Kotorska Bay.

Another histroic and cultural landmark is the Regional museum. The building of the museum is the endowment of the former mayor Mirko Komnenović. The Museum encompasses archeological , historical, ethnological and icon collection. They include the remains of the early human communities from the Neolithic period found in the cave Vranjaj, also findings from the Bronze and Iron Age tumuli.The archeological collection contains amphorae and fragments of ship cargoes originating from all Mediteranean countiries during the dominanceof Ancient Greece, Rome and Byzantium. The Regional Museum has about thirty icon, predominatly those of Boka Kotorska icon painting school Dimitrijević-Rafailović. The museum keeps traditional artifacts of this region. Parapet plate from St. Thoma's Church of Kuti dating from the IX century also has special value. The Regional Museum owns botanical collection with over 100 selected species of Mediterraneanand subtropical plants plantedin park style.

Herceg Novi is the city with the highest avarege temperature on the Adriatic coast , with more than 220 sunny days a year. It is known as a town of eternal greenary, where the sailors brought more 250 diferent species of egsotic plants from its sailings around the world.

" Herceg Novi is the city of eternal greenary, sun and enless stairs"

Be up to date with innovations in our hotel offer. Log in on our mail list and recieve electronic newsletter with informations about new tretmants, packages, activities and other news related to the hotel Lighthouse. sales@hotellighthouse.me